EiffelBase is a nice library for the beginner. But when you start working with it, you will see more and more of its ugly faces. I have recently stumbled over a feature in the FILE class that captures two of the major deficiencies at the same time: 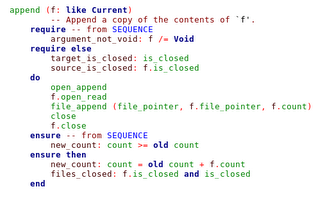 Please note that we are not talking about a minor, unimportant feature in an seldomly used class.

The first deficiency is easily visible: we are trying a strengthen a precondition by using require else, something that just does not work in DbC. It is just wrong. It shows that inheritance was used inapproprately (Why is a FILE a SEQUENCE? Why does SEQUENCE not offer an opaque precondition for append? We are talking about two classes from the same library!).

But the second problem is even more irritating: why do we need to pass two closed files? Normally we append to already open files. In my case, I wanted to write some output to a file, append another one, then continue writing, perhaps appending a second one and then close the final result. Instead, I have to write to a file, close it only for append, directly open it afterwards, and so on. EiffelBase does too much for the user, and by this limits the reusablity of the library.

Comments:
By way of comparison, in SmartEiffel any OUTPUT_STREAM has the feature

with a precondition that the current stream (i.e. the target) "is_connected" (i.e. is opened).

There is a similar feature in Gobo (with a precondition "is_open_write"), except that instead of passing a file_name (who knows if that file exists or not) we have to pass a stream opened in read-mode. The postcondition says that this input stream has been read to the end.

Yes. I mean, getting "append" right is not too difficult in the first place. GOBO got it right, EPOSIX got it right, SmartEiffel got it right ... why didn't EiffelBase, a library that was even used for publishing a book on library design, get it right?